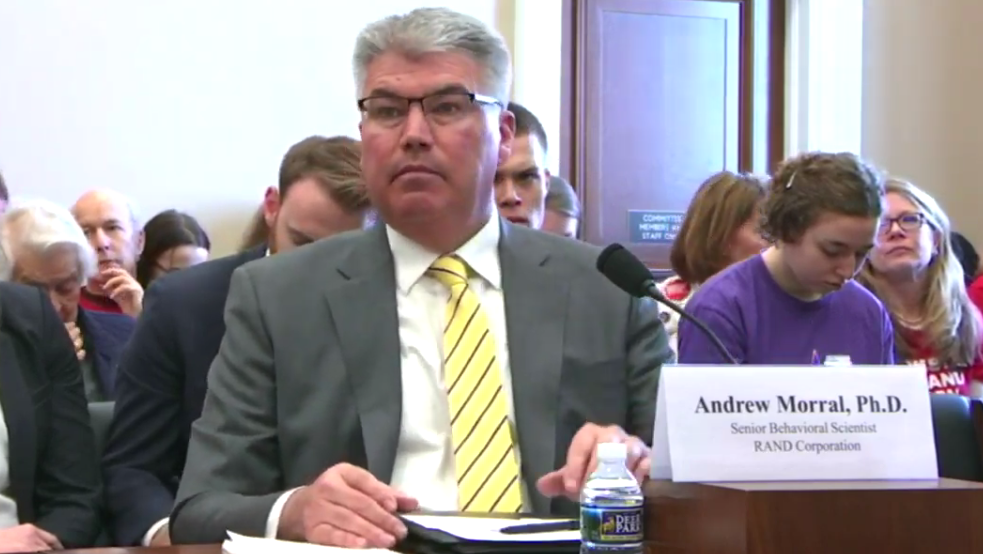 Andrew Morral, Director of the National Collaborative on Gun Violence Research, appeared today before the House Appropriations Subcommittee on Labor, Health and Human Services, Education and Related Agencies to discuss the potential impact of federal support for gun policy research and gun violence prevention research. Morral was one of four people to testify at the public hearing, which centered on Addressing the Public Health Emergency of Gun Violence.

It was the first House Appropriations committee hearing dedicated to gun policy research funding since 1996. The hearing, which lasted two hours, established one element of consensus: a majority of committee members expressed concern that few scientifically-proven answers exist to the most pressing questions on how to prevent gun violence deaths and injuries. They sought recommendations from Morral and the other witnesses on where research was lacking, and what areas should be prioritized.

"Gun violence is a public health emergency," said Committee Chair Rep. Rosa DeLauro. "Anything that kills 40,000 people a year is a crisis … yet CDC has been absent from this agenda for 20 years."

The testimony drew on findings from Gun Policy in America, a RAND initiative he led, as well as his recent experiences reviewing hundreds of proposals submitted to the collaborative by social scientists across the U.S. and Europe. Morral made three points to underscore the need for expanded federal funding around gun policy research:

The federal government invests less than one-fiftieth as much on gun violence research as it does on other causes of death that kill similar numbers of people. This is consistent with findings from RAND's seminal Gun Policy in America report, which determined that few rigorous studies have examined the effects of many common policies at the state level.

Although some research funding is available from universities, states, private philanthropy, and occasional federal funding, it's not enough. Even basic questions like whether gun free zones deter or attract gun violence, or whether child-access prevention laws prevent gun owners from defending themselves in emergencies have not been rigorously studied. High-quality research is needed to clarify the truth about facts that have divided policy analysts on opposite sides of gun policy debates. More and better policy analysis research could help lawmakers craft policies that can help reduce gun injuries, deaths and violence.

Congress can help build a robust, transformative gun policy research enterprise in a number of ways:

The United States has previously established successful research programs to address other causes of death and injury due to human decisionmaking, such as smoking and car crashes. Today fatalities from both causes occur at rates far below those when federal investment began. Firearms injuries too could benefit from a dedicated program of federal research.